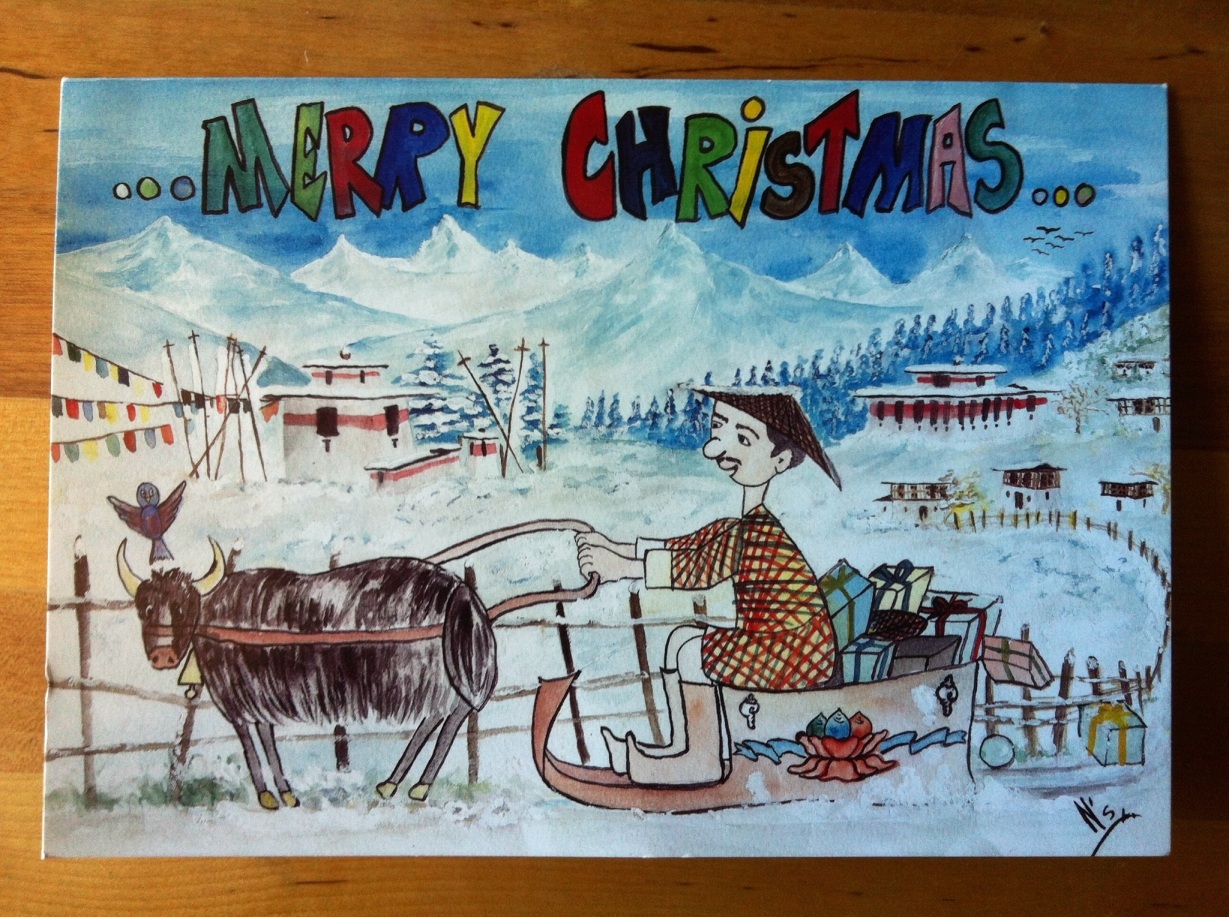 The smell of turkey pervades the apartment, seeping into the hallways beyond. The lights on the tree twinkle, giving the ornaments a technicolor green glow, and the laughter and the eggnog both settle nicely like a haze over the room as I lose myself in thought.

This is our second Christmas in Bhutan. Since this time last year we have switched to a warmer apartment with a real oven, upgraded from roast chickens to a turkey (courtesy of his Majesty the King – but that’s another story), and even managed to be gifted a Christmas tree by friends with connections.

Despite some of our adaptations and upgrades, other parts of Christmas here remain a little different – no carols on the radio, no shopping rush, no snow on the ground, and only a conscious effort starting in December to convince oneself that there is a holiday coming up.

Despite being an overwhelmingly Buddhist country, Bhutan actually has 15,000 – 20,000 Christians in the country – some 2-3%, compared to 84% Mahayana Buddhists and 12% Hindus. Although the constitution of Bhutan promotes secularism and religious tolerance, it also labels Buddhism as the ‘spiritual heritage’ of the country. (Interestingly, Bhutan ranks 28th on the Open Doors world watch list of countries where the persecution of Christianity is most severe.) There is (apparently) a church in Thimphu, as well as a Christian school which supplies the young carollers who perform a few holiday numbers in red and white ghos and Kira’s at the Taj Tashi Hotel.

For us godless Christians who just want to enjoy the nostalgia of Christmas past, there are no obstacles to celebrating, as long as one can be a bit creative. In fact, this entrepreneurialism and innovation is useful for holidays of all origins – this year we hosted a Halloween party, two Thanksgiving dinners (we got the wrong week the first time!) a Christmas party and a Christmas dinner. Now we’re totally partied out, but it sure was nice to share so much fun with our friends and colleagues here!

Most of our festival atmosphere comes through the kitchen and some basic crafts. A week before Christmas we started making cookie dough with a pfeffernusse batch and chocolate anise Krantz family recipes. We had friends over for several hours of cookie cutting and decorating. Last year we used a couple of tin cans to make a lot of wreath-shaped cookies, but this year we splurged to buy some cookie cutters that we spotted in a shop. (They had only one set, so we were lucky!)

In the run up to the Christmas party, we had a schedule for the whole week: pfeffernusse cookies on Tuesday; ginger cookies, chocolate chip cookies, chilli chocolate almond clusters and hummus on Wednesday; banana bread, brownies, triple ginger cake and egg nog on Friday; and finally, mulled wine, crispy cheesies and bacon rolls on Saturday. Each event was accompanied by an eclectic mix of Christmas music from Bela Fleck to the Boston Pops Symphony orchestra. Each day more decorations were added – snowflakes cut from local handmade paper, holly oak and pine cones collected during a hike for table decorations, geometric paper ornaments crafted for the tree by creative friends.

We managed to make merry with almost 40 people in our little apartment and a few days later hosted two lovely couples whose company is always worth a laugh. Some came with small gifts, but most showed up with consumables, usually either booze or baked goods. On Christmas morning there was not a single present underneath our Charlie Brown Christmas tree… And that was okay.

Antonia did surprise me on Christmas with a homemade card offering love for Christmas, and I returned the favour of affection by shaving for the first time all year. And that was our Christmas: we made each other and our friends happy. We brought small amounts of joy into people’s lives, and with the low expectations here came no disappointments. Nothing was out of stock, no wrong sized or colours, no ice storms or shipping snafus prevented Santa from coming.

We just baked and cooked for hours and exchanged laughs for an equal time. Over one week we cooked up over six pounds of flour, five pounds of sugar, four pounds of butter, three dozen eggs, two pints of brandy… and a turkey from His Majesty. Meanwhile, the happiness we enjoyed in the company of friends (and over Skype with our families) is unquantifiable.

It is not easy to be so far from our families on holidays like Thanksgiving and Christmas, but being able to carve out a small piece of our own culture and mix it up with Bhutanese chillies allowed us to enjoy the season as much as we might have anywhere. A truly Bhutan Christmas…

Will it be different next year, with more family around and a more commercial backdrop? Of course it will, and we will try not to be Grinches about it, but hopefully we can still remember what brought us our own slice of happiness while celebrating in Bhutan!

David & Nancy’s crafty creations (on the tree they gifted us!) 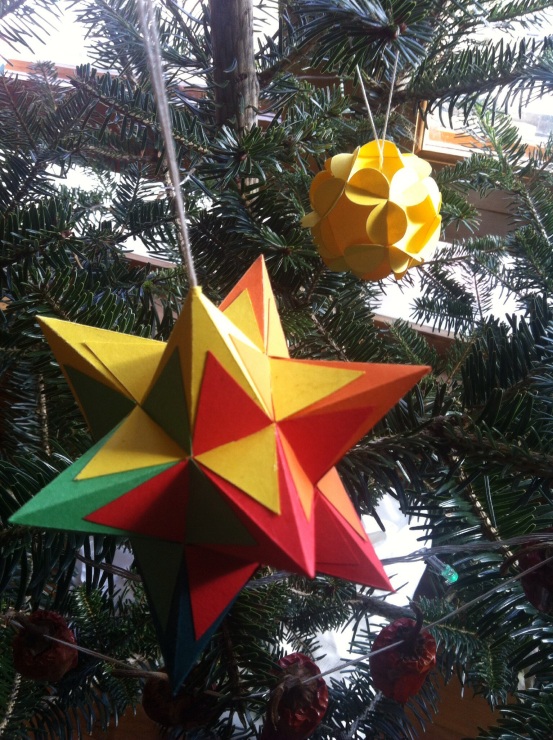 None of that made in China stuff. Hand made in Bhutan!

Snowflakes snipped by Jessica and me: 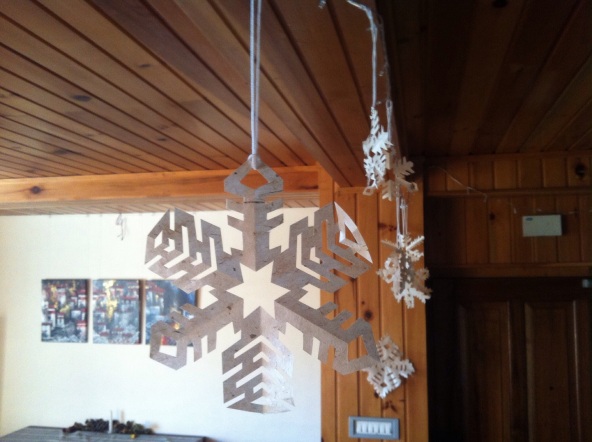 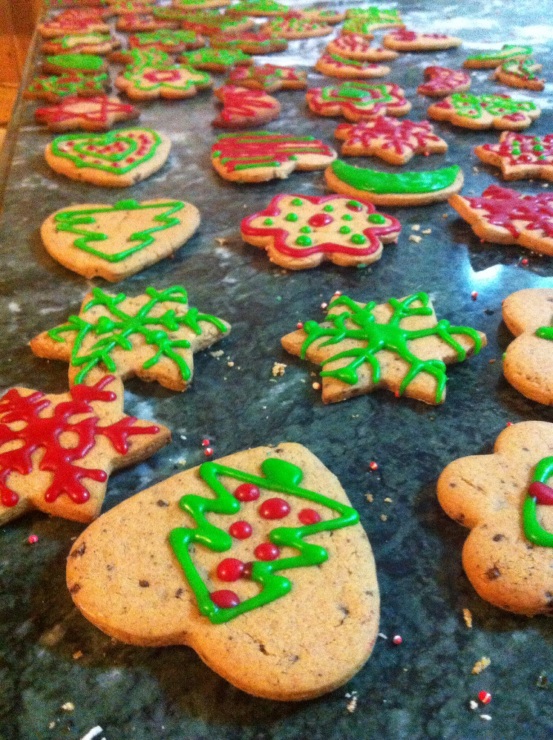 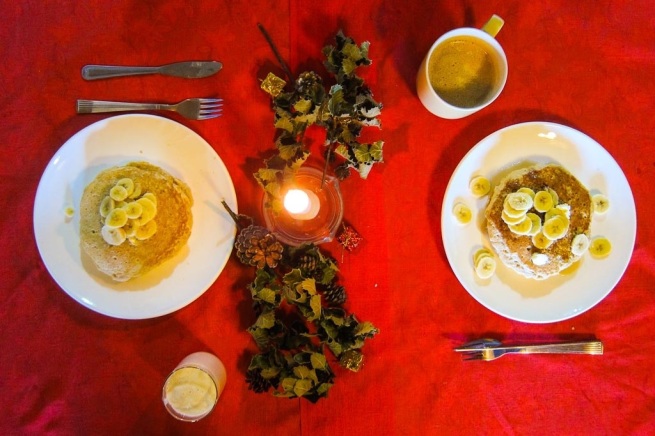 The feast before the feast! 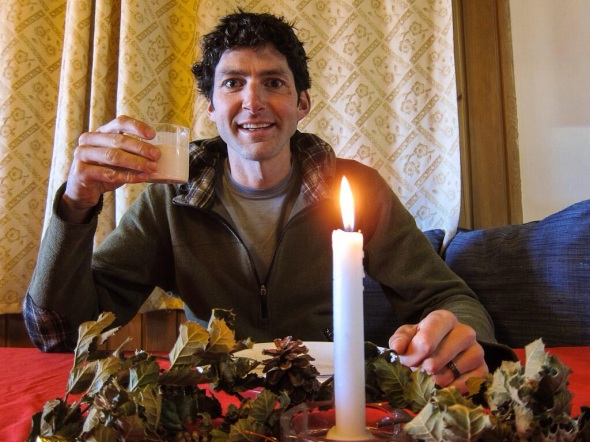 Even Laya was getting into the spirit: 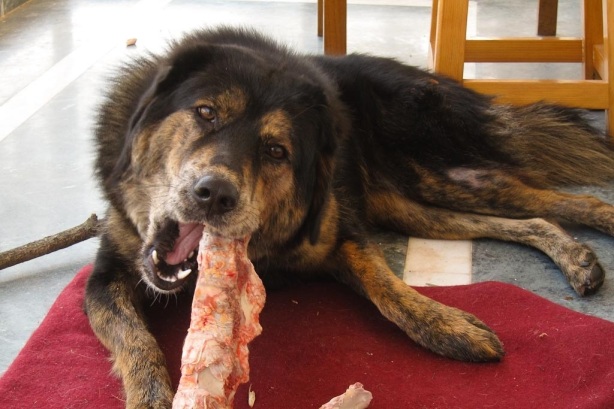 That awkward moment of stuffing the bird for the first time: 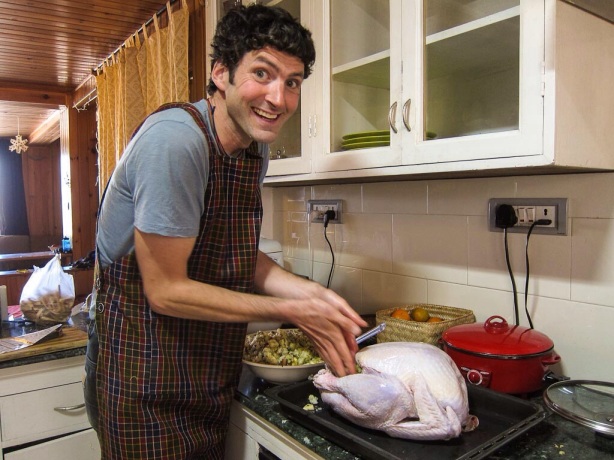 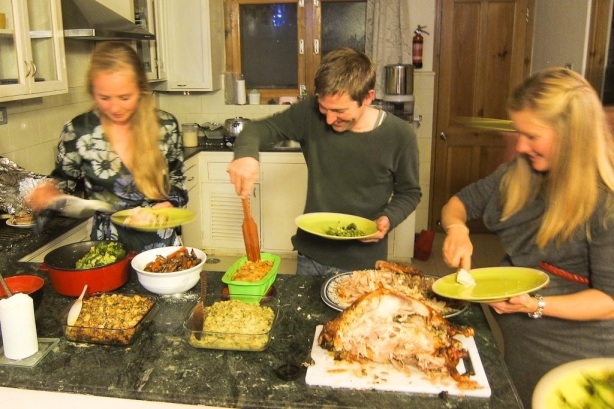 Showing off our Christmas tree: 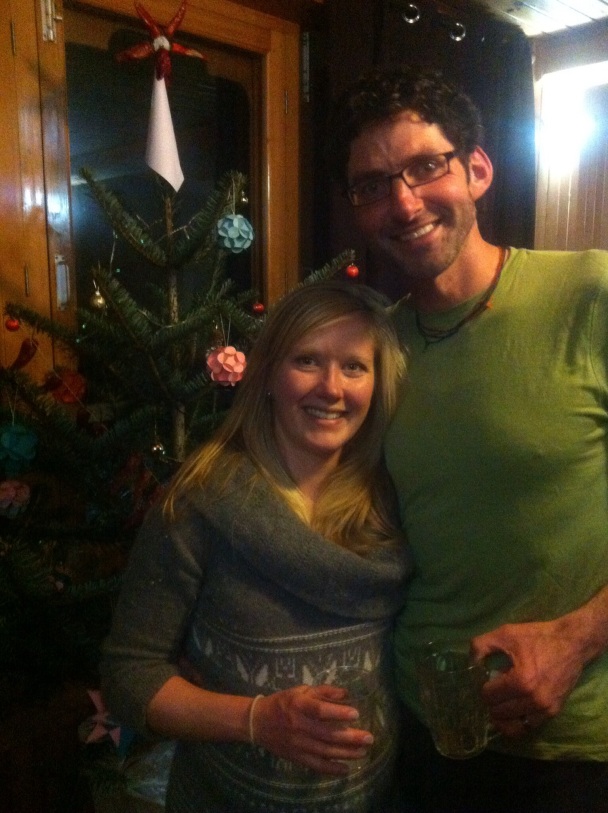 3 responses to “A Very Bhutan Christmas”

What this page is about

A creative outlet that helps us share our experiences, our love for Bhutan, and keep in touch with friends and family. We hope you enjoy!